Car-dominated cities have no future. Cars are basically metal cans that have ten to forty times the weight of the passenger they carry. On average, cars are only used during 5 per cent of the time, while during the other 95 per cent they block valuable urban space. When the amount of work is considered that is necessary to earn the money that is spent on the purchase, repair, parking, etc. of cars, the calculation of the ratio of distance travelled to time spent is rather unpleasant: the average speed of the car is not more than four to eight kilometers per hour. Furthermore, cars with combustion engines contribute to the acceleration of climate change. This cannot be called an efficient means of transport; thus a radical change is unavoidable.

“Ecomobility” is the term for the green alternative to the automobile-dominated transport systems and mobility patterns in our cities. According to Konrad Otto-Zimmermann of The Urban Idea, “Ecomobility, a term we coined in 2007, denotes the entirety of walking, cycling and wheeling, and ‘passenging’, i.e., using public transport. Car sharing may fall under ecomobility, provided cars are small, light city vehicles powered by renewable energy.” The word “ecomobility” implies mobility that is ecologically sound and economically favorable, and thus eco-efficient. As ICLEI phrases it, it is “travel through integrated, socially inclusive, and environmentally friendly options”.

Ecomobility applies the subsidiarity principle to both the individual choice of transport mode for each trip, and to urban transport policy and planning: as an individual, walk; where you can’t walk, go by bicycle; where the bicycle can’t help, use public transport. If you still need a car for a specific purpose, use a vehicle from a car-sharing service. As a policymaker or planner, plan for a walkable city. Also create a network of safe cycleways, as well as bike sharing, parking, and bike-and-ride infrastructure. In addition, provide an attractive public transport system. 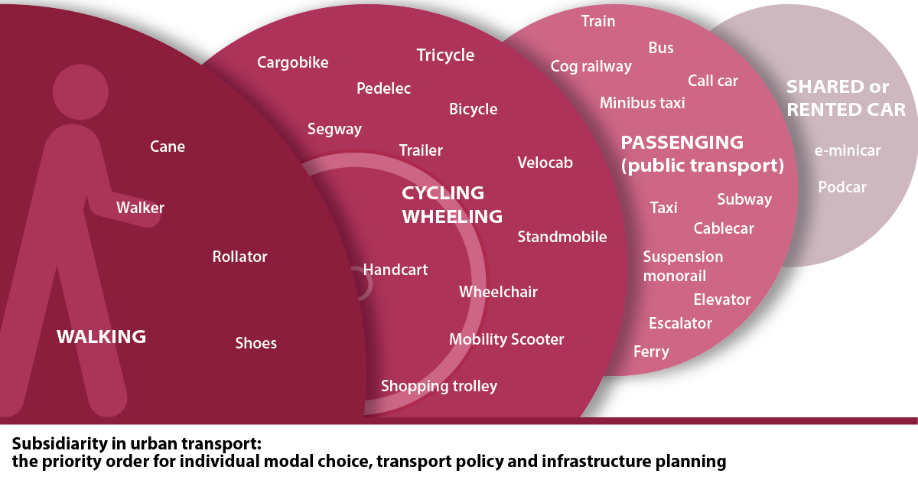